I cannot guarantee that this soup will work for people in full-throttle chemo, as I have eaten it on Vidaza, which does not make me as queasy as other chemo. However, it’s worth a shot–the flavors are mild except the ginger, which is a good flavor for the queasy.
1 large packet fresh basil

1 cup brown rice (or white if you want super digestible/don’t want fiber). I recommend jasmine or basmati, which I found at Whole Foods

half a package of thin tofu skins

Coat bottom of heavy Dutch oven with Pam or olive oil. Spread ginger paste on there, layer on dry brown rice, cook on high for a few minutes until it ginger and maybe rice starts to toast brown. Then add basil, broth, and tomato, and cook until rice is cooked, at least 35 minutes.

If you are lucky enough to be near an H Mart (the giant Asian supermarket), see if you can score some of the tofu skins that are thinner than normal tofu skins, and seem to me a good way to get some of that protein you’re supposed to be packing in. The normal ones come in the refrigerated aisle folded up into packages maybe 6″ x 7″, whereas the thin ones tend to be on an unrefrigerated shelf and be in a larger package (much taller and wider than a sheet of typing paper).

Today my bone marrow biopsy came in looking “beautiful,” as Dr. Concerned put it–they could not see any cancer cells in it! (They are still doing the genetic tests, but it’s unlikely they will turn up anything bad, since the tests they did already are good). Yay yay yay! I should have know the biopsy was good the minute I saw Dr. Concerned, because she was smiling (beaming, almost) rather than looking concerned. My awesome dad came into town to go to the appointment with me. Thanks, Dad!

I’m definitely not out of the woods yet, as my cancer could recur–myelodysplastic syndrome does this too often, especially in the first couple years after transplant. I’ll be getting regular bone marrow biopsies for follow-up–hopefully from Nurse Practitioner Brusque Yet Friendly, whose skills are excellent at holding down the extreme-pain-time to just the first pull of marrow. Although Dr. Virginia did a particularly good job the last time he took one, too–when he was putting the needle into my hipbone I thought he was still just putting in the lidocaine. Until the first pull. But hey, bone marrow biopsies only last a few seconds, and have the positive effect of enabling me to feel all hardy and survivor-y. 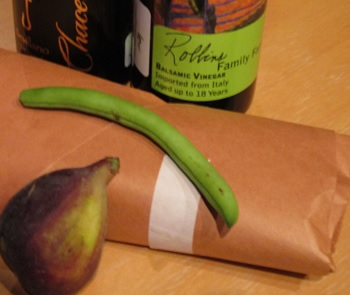 Anyway, the point is, so far, so good! I’m really grateful to God and to everyone who’s been praying and offering emotional support. Now I just concentrate on recovering my energy, avoiding sunburn, and being careful as my immune system recovers.

And on food. After the appointment Dad took me to Union Market to stock up on some flavor. (Yes, I know gentrification is complex and often problematic, but I want a $30 bottle of balsamic vinegar, darn it!) Unfortunately, the pate de campagne has to wait another four months at least, as I’m too immunocompromised to eat deli items. And Dr. Concerned vetoed soft cheeses for now. But we had some Takorean (yes, bulgogi in tacos…it’s really good. For real, try it if you get the chance.) We also got me some groceries, including some “heartichino” sausage from Red Apron Butchery, which I later cooked until it would have made Nathan Anda’s heart very very sad, but my oncologist’s reasonably peaceful, to see it–and it still tasted a-MAZ-ing. Thanks, nose-to-tail foodie charcuterie trend!

Because Vidaza doesn’t affect my appetite much, I am able to enjoy Tasty Kabob when the truck shows up in my neck of the woods. I was hoping the truck would show up tonight, and it did!

I’m not sure why it’s called “Kabob,” as there are no sticks involved, but it sure is tasty. And, at this point, the guy in the truck recognizes me and puts on two gloves so he won’t absent-mindedly backhand the foil with his ungloved hand before he puts my gyros into it.