My doctor at Johns Hopkins for the last seven years (including my first stem cell transplant and follow-up) has been a great person I’ll call Dr. Concerned. I’m happy to report that she is just as smart as Dr. House, but with an exactly opposite personality and, more importantly, the exact opposite way of working. 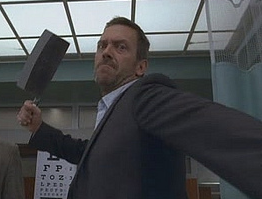 Dr. Concerned is the exact, total opposite of this. Image from Better Than News on Flickr.

Watching House is a double pleasure: enjoying the banter and, still more, being grateful that one’s friends are not screwed-up people who devote all their free time to head games. However, I have the much greater pleasure of assuring people that generally doctors are well-meaning people and, more importantly, that they are willing to work together.

At Hopkins, a bunch of doctors all meet together to go over new patients and weigh in on treatment. This makes me feel very good, because brilliant troubled iconoclasts might make good tv, but as a patient I’d much, much rather have brilliant people working together as a team to deal with my unusual medical problem. I’m also glad, of course, that I don’t have to start bleeding out of a new part of my body three times consecutively, to create drama before each commercial, before being correctly diagnosed.

I think most doctors (other than a few egomaniacs) are willing to work together on the hard cases, although I wouldn’t be surprised if the U.S.’s crappy, often out-of-date medical records system sometimes impedes them from doing so as effectively as possible. (Fellow patients out there–*always* save your films and pathology reports!)

Dr. Concerned is clearly an even more empathetic person than average (though a little of that may just be the shape of her face, because it seemed to me she looked a little concerned even when giving me good news during routine yearly appointments). I’ll probably start seeing a different doctor at Hopkins who specializes in the kind of cancer I have now, but I’m sure going to miss her. Thanks for seven years of great care, Dr. Concerned!