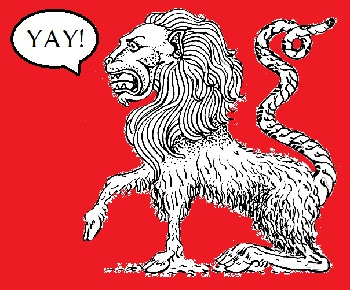 Yesterday I got some great news: I am a bona fide chimera! Fortunately this means not that I’m a goat with the head of a lion or some such, but rather that I’m a mixture of original me-flavor cells (everywhere but the blood and marrow) with new-and-improved donor-flavor blood. This was exactly the goal of the transplant. The test (for which they’d taken blood a week earlier) showed I’m 100% donor in my peripheral blood (i.e., blood in general) and 94% donor in my T cells.

I briefly emailed Dr. Concerned and Dr. Virginia the news, and they said it was “fantastic” and “great” respectively. I’m especially psyched about Dr. Concerned’s response, as she’s the big fancy transplant expert.

Of course, this is just one step along the journey–it’s certain that a few of my original marrow cells, including some of the cancer, is in there someplace (especially as I just got a “mini” transplant; after the chemo I got in 2006, my body couldn’t handle the full myeloablative fry-the-heck-out-of-your-old-marrow treatment). So the goal is for my new immune system, now that it’s up and running, to go after the malignant cells.

In other news, I have a mild rash which is moving around random parts of my body (leaving some places as it shows up in others). It’s annoying and itchy, but it’s likely a very mild case of graft vs host syndrome, which it turns out is actually a positive thing–it shows that the donor cells are feisty in there. In 25 days (at day 60 after transplant) the doctors will take a bone marrow biopsy to see whether the new marrow is doing the right thing and wiping out the residual cancer cells. They will also discharge me back to DC on day 60 (although the biopsy test results will, if past experience is any indication, not come back for all eternity in subjective time, and maybe a week or so in objective time).

Oh, and today I got to stop taking one of the most annoying drugs (the one where I had to get up at 6 am and also to not eat for several three-hour swaths of my day, and it irritated my stomach). So, I’m grateful for that also. Yay!